The Legal Adviser of
Kengama Unity Forum, a socio-political group in Rivers State championing the crusade for a substantive Chief Judge for the state, Barrister Tubotamuno Dick has criticised the National Judicial Council (NJC) over its directive that the most senior judge in the State High Court and Customary Appeal Court should perform administrative functions of the two courts pending the resolution of the crisis over the appointment of a chief judge in the state.
Barrister Dick in an interview with journalists at the Port Harcourt Federal High Court, said the NJC lacked the powers to give such directive in any state.
He said, “the NJC as a citadel, composed of respected honourable legal personalities chaired by the learned Chief Judge of the Federation can not do such thing. It is a court of competent jurisdiction can make such declaration.”
It would be recalled that the National Judicial Council (NJC) had in a letter directed the most senior judge at both the State Customary Court of Appeal and the High Court to assume the administrative responsibilities of their respective offices following the resolution of the crisis rocking the appointment of the substantive chief judge of the state.
The state government had in a statement credited to the Attorney-General and Commissioner  of Justice, Wogu Boms in conjunction with the State Judiciary Service Commission (JSC), warned that disciplinary action awaits any judiciary staff who abides by such directive.
The state government averred that such directive was an attempt to bring Justice Daisy Okocha through back doors to act as the Chief Judge of the state adding that it is only the state governor that is  constitutionally empowered to appoint a Chief Judge for the state and not the NJC.
The Federal High Court in Port Harcourt presided over by Justice Akanbi recently in  a suit brought by the State government seeking the constitutional interpretation on the action of the NJC  on  the recommendation of Justice Daisy Okocha as the Chief Judge of the state ruled  the actions of the NJC “as null and void”.
The court further set aside the letters written by NJC to the State government  recommending Justice Daisy Okocha to be appointed as the Chief Judge of the state adding that the governor was not bound by law to accept the NJC recommendation without making any input.
The court therefore, ruled that Justice Agumagu was the most qualified by the law to be appointed as the substantive chief judge of the state and was appointed by the State government, later suspended by the NJC. 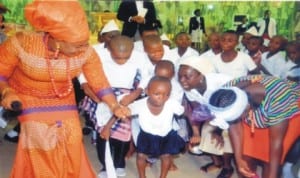