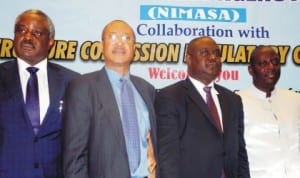 Beneficiaries of the Federal Government’s Subsidy Re-investment and Empowerment Programme (SURE-P) in Port Harcourt City Local Government Area (PHALGA) have faulted the deduction of N2,000 from their approved monthly pay.
The beneficiaries who thronged the Mile Three branch of First City Monument Bank (FCMB) last week lamented the said deductions from their monies that were not even enough to support them.
In an interview with The Tide, one of the beneficiaries, Mr Dagogo Ken, said he received the sum of N8,000 instead of the approved N10,000, adding that it was wrong for either the council or the bank to have deducted from his already meager entitlement.
Ken noted that he first received an alert of N10,000 in his account, adding that a subsequent alert of N8,000 was went by FCMB to counter the first alert.
Another beneficiary, Mr Ahmed Tijani, said that since the inception of the programme he has only received N8,000 being payment for January, expressing disappointment over the leadership of the council who they believe was behind the deduction.
In her contribution, a female recipient from PHALGA Ward 5 who pleaded anonymity noted that the deduction is barbaric, adding that other local governments paid the complete N10,000 to their own beneficiaries.
She reiterated the need for the council chairman to do something to restore the shortfall.
When attempts to reach the council chairman failed, The Tide contacted the press secretary to the council, who said he was not aware of the development but promised to call back, which he did not do as at the time of going to press.
Meanwhile, the beneficiaries of the SURE-P programme in Obio/Akpor Local Government Council have been paid N10,000 for three months, starting from January.
When our correspondent contacted Etche Local Government Area, a senior officer who preferred anonymity said that the only deduction was from those who had just opened their accounts, adding that old account owners only had the COT and SMS alert charges deducted which is very insignificant.
He stated that beneficiaries are paid N10,000 while the supervisors receive N50,000 from the approved SUER-P fund.