The management of Heart
land FC of Owerri has rejected calls by fans of the club to sack its Chief Coach, Ranson Madu.
The fans in separate interviews told newsmen at the Dan Anyiam Stadium, Owerri that the coach should be sacked for “poor performance’’.
The fans expressed bitterness over the poor performance of the club in the ongoing 2013/2014 Nigeria Professional Football League (NPFL), saying it was beyond expectation.
Heartland’s Media Officer, Cajethan Nkwopara, however, told newsmen that the problem with the club was not technical crew.
He said the club’s management went to the open market lately and were left with leftover players to buy.
According to him, the club is undergoing rebuilding process where most of the players need to adapt with the philosophy of the club.
He described the decision of the club’s fans for management to sack the coaches as misplaced priority and urged them to be patient with the club for a possible improvement.
Heartland in the ongoing season has won only one match out of seven and drew six to place the club in the 18th position of the 20-club league format.
The only match it won was against Eyimba of Aba.
A popular supporter of the club, Mr Emenike Udeh, said the only way for Heartland to come out of the relegation zone was for the club’s management to sack the chief coach.
He then, urged the management to engage a more experienced coach, saying it was not too late for the club to stay out of the relegation zone.
Udeh said that as a prominent supporters member, he could direct other fans to start boycotting Heartland’s matches at home and away if the management failed to yield to their desire.
Another supporter, Ibe Anosike, said that favouritism had eaten deep into the club.
“The problem is favouritism which started in the regime of the present chief coach of the club.
“We know players who are very good, but the coach will rather prefer to feature people who gave bribe to be featured.
“The management must sack both the coaching crew and the technical crew for the problem to be settled,” he said.
Anosike also reacted to the payment of sign-on fees to players by Gov. Rochas Okorocha and which was later replaced with insurance package after the abolition of sign-on fees.
Okorocha paid sign-on fees arrears of Heartland players before its abolishment and introduced an insurance package for them to boost their morale.
The fan, however, said that the governor’s moves were to boost players’ morale but that the coach has failed.
“The problem of the club is not from the players but the coaches who have failed to use the players properly,’’ Anosike said.
Another, Ikenna Tobem, expressed the fear of Heartland going on relegation this season following their current position on the league table.
“Government has done enough in the area of welfare which is enough for both the players and the management to impress the government,’’ he said.
According to him, it was sad that Heartland which won the Federation Cup back to back in 2010/2011 and 2011/2012 seasons was now in the 2013/2014 Premiership relegation water.
“We are very unhappy that the champion has fallen and this has placed the club in a very bad shape,’’ he said. 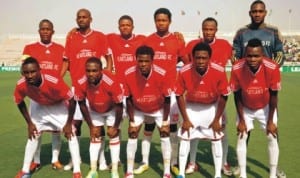