Barcelona’s hunger to win the UEFA Champions League may be greater than ever after being dealt a two-window transfer ban recently.
The Camp Nou outfit were handed the punishment by FIFA a day after they were held to a 1-1 draw by Atletico Madrid in the first leg of their quarter-final tie for irregularities found in their transfer dealings at youth level.
A transfer embargo of that magnitude would likely weaken Barca over the coming seasons, so Gerardo Martino’s men will be keen to make the most of their opportunity this time around.
Atleti – aiming for their first semi-final appearance since 1974,  holds the away-goal advantage heading into the second leg, but may be forced to do without star striker Diego Costa, who limped off with an injured hamstring after 30 minutes last week.
The three previous domestic meetings between the sides pointed to this tie being a hotly contested affair, and the first leg did not disappoint.
Diego, who came on for the injured Costa, opened the scoring for Atleti in the 56th minute, before Neymar levelled matters 15 minutes later.
The result was the fourth draw between the sides in all competitions this season.
However, the hosts’ home form should give them cause for optimism, having won 16 of their last 17 home games in UEFA competition.
That said, Barca has not lost for four years at Atleti, and will need to maintain that run if they are to reach a seventh successive semi-final.
The sides currently occupy the top two spots in the Spanish top flight – Atleti are one point clear of second-placed Barca – and the last two-legged tie between them, the Spanish Super Cup, was won on away goals by the Catalan giants.
While conceding it would have been nice to head into the second leg with a kinder scoreline, Barcelona’s Xavi claims the need to win could benefit his side.
“Atletico cut down the space,” he said. “It’s not easy to create chances, and we have to be fluent in the game and move the ball quickly. 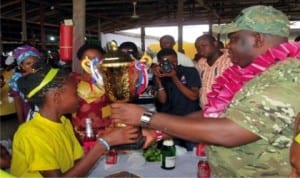