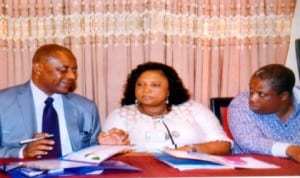 The All Progressives Congress (APC) says it is will provide level playing ground to all contestants in its nationwide Ward Congress scheduled for tomorrow.
Interim National Organising Secretary of APC, Sen. Osita Izunaso, gave the assurance while briefing newsmen at the end of workshop for the party’s officials in Abuja.
He said the procedure of the congress would be guided by the constitution of APC, and urged officials to adhere strictly to that to ensure justice and fair play.
Izunaso, debunked insinuation of planned consensus candidates in some states, stressing that people must emerge out of popularity not through imposition or consensus.
The Interim National Secretary, APC, Alhaji Tijjani Tumsah, said APC could only recognise a consensus candidate after voting was conducted, saying “even where there was consensus, there has to be vote cast”.
Tumsah, said that the party was prepared to give the necessary change that Nigerians are yearning for, adding that APC was a vehicle for social transformation.
He urged the youth to use the opportunity of the congress to contest for various positions in the party at all levels with a view to deepening democratic culture in the country.
According to him, the National Congress Supervisory Committee (NCSC) will be responsible for the overall conduct of congresses at all levels.
Meanwhile, the All Progressives Congress (APC), Rivers State Chapter, has concluded its seven-day fasting with pomp and pageantry, using the opportunity to pray for peace, good governance and the wellbeing of Rivers State and her people.
The party at a ceremony held at the State Secretariat in Port Harcourt, last Tuesday, also prayed for wisdom, protection and good health for the family of Rivers State Governor, Chibuike Rotimi Amaechi and the members of the State Executive Council, including the Speaker, Rt. Hon. Otelemaba Dan-Amachree and members of Rivers State House of Assembly.
In a statement issued in Port Harcourt, yesterday, Senior Special Assistant on Media and Public Affairs to the Interim Chairman of APC, Eze Chukwuemeka Eze, said that prayer was equally offered for a successful tenure for the newly appointed Chief Judge of Rivers State, Justice Peter N.C. Agumagu.
Interim Chairman of APC in Rivers State, Dr Davies Ibiamu Ikanya, who declared the fasting session closed, urged party members to embrace God, saying that without Him, all the party’s efforts to provide good governance for Rivers State and the entire nation would be in vain.
Ikanya emphasised the readiness of his administration to organise a successful ward congress of the party tomorrow.
He urged all party faithful to shift all forces to their localities and ensure that credible persons are elected at the ward level as that is the engine room of the party’s campaign for the 2015 general elections.
In her speech, the APC Woman Leader, Mrs. Caroline Naagbo, congratulated everyone for finding time to participate in the closing session despite their tight schedules, and urged them to be courageous and commit everything to God as their only hope in life.
Naagbo tasked them not to relent in prayers as it is the only key to victory, further insisting that the APC was the only party that can bring the expected change in the state and the nation.
“All of us are aware that our governor is gender sensitive but we urge him to offer us more slots in the State Executive Council and ensure that women are given more responsibilities at the local government councils as we are ready to mobilise ourselves and the youth to ensure that APC forms the next government come 2015,” the APC woman leader said.
Over 2,000 party faithful attended the prayer session dominated by women from all walks of life across the 23 local government areas of the state