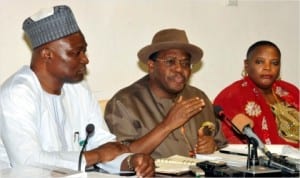 The Speaker, House of Representatives, Alhaji Aminu Tambuwal, has described as “unfortunate” the death of some Nigerians on Saturday at recruitment centres of the Nigeria Immigration Service (NIS).
This is contained in a statement issued by his Special Adviser on Media and Public Affairs, Malam Imam Imam  yesterday in Abuja.
Some applicants died at some of the recruitment centres as a result of stampede.
According to the speaker, the death of the innocent youths was sorrowful and regrettable.
He said it was more regrettable considering the fact that they were at the screening centres in search of jobs that would better their lots and that of their loved ones.
Tambuwal urged the authorities concerned to investigate the remote and immediate causes of the tragedy, and advised them to map out strategies to prevent future occurrence.
He urged governments at all levels to work closely with the Organised Private Sector to tackle the unemployment problem facing the nation.
The speaker condoled with the families of those who lost their loved ones, and prayed for quick recovery of injured ones.
Similarly, the All Progressives Congress (APC) yesterday called for investigation into the ‘needless deaths’ of some job seekers at some venues of job test of Nigerian Immigration Service (NIS).
Not less than 19 people were reported dead among the over one million applicants on Saturday at some centres of the test for the NIS jobs.
APC interim National Publicity Secretary, Alhaji Lai Mohammed, in a statement in Lagos, described the incidence as a direct consequence of unemployment problem plaguing the nation.
The party, according to the statement, expressed ‘great distressed’ at the deaths of the job seekers, adding that the minister of interior should bear the direct responsibility for the deaths.
The statement said that APC commiserated with the families of the victims and wished those injured speedy recovery.
It decried government’s inability to create jobs for the nations teeming youths, stressing that the number of jobless Nigerians had reached alarming rate.
“Massive mindless looting of the public funds that could have been used to create millions of jobs end up in the deep pockets of corrupt government officials without any consequence.
“The truth has been laid bare – 5,000 or so vacancies declared by NIS attracted over six million applicants, from which over half a million was shortlisted, according to published reports,’’ it stated.
The statement said that the ministry of interior had many questions to answer over the arrangements made for the job tests in 37 venues nationwide.
“Is it true that the minister directly presided over the recruitment?
“Why was such an arrangement made for the test when so many people were invited?
“Could the test not have been done in batches to avoid a stampede?’’ it queried.
However, the Peoples Democratic Party (PDP), has called for immediate investigation of the death of some Nigerians who died during stampede at the recruitment exercise at the National Stadium, Abuja on Saturday.
National Publicity Secretary of the party, Mr Olisa Metuh, made the call in a statement on Saturday in Abuja.
He also called on the Ministry of Interior and relevant government agencies, to immediately swing into action to unravel the remote and immediate causes of the stampede.
Metuh further urged government agencies and parastatals, as well as all PDP elected and appointed officials at all levels of government to redouble their efforts in curbing unemployment in the country.
He said the party was shocked and deeply saddened by the news of the untimely death of the young citizens who were at the exercise.
He said the victims were not at the venue only to secure jobs but also to be allowed the opportunity to contribute toward the development of the nation.
He commiserated with the families of the deceased, and prayed for the speedy recovery of the wounded.
Meanwhile, the Minister of Interior, Mr Abba Moro, has described Saturday’s stampede at some Nigeria Immigration Service (NIS) recruitment centres, that claimed lives of some Nigerians, as “unfortunate and a national tragedy.”
The minister spoke yesterday in Abuja, when he addressed newsmen after he visited the Abuja National Stadium, where seven persons died.
Moro, described the incident as “unfortunate and a national tragedy,’’ adding that this was not the time to apportion blame.