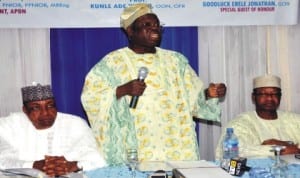 Governor Chibuike Amaechi says the decision to join the All Progressives Congress (APC) was borne out of developing Nigeria and correcting the mistakes of the past.
Amaechi made the clarification when members of the House of Representatives Committee on Water Resources paid him a courtesy visit last Monday in Government House, Port Harcourt.
He therefore called on those who were yet to join them to do so, saying, “the earlier, the better becuase the reason for going there is basically we stand to change the course of development in Nigeria.
“We think we should move forward so that this country cannot continue to suffer what it has been suffering,” he pointed out.
Amaechi had at a special dinner and award night to mark Port Harcourt City’s centenary celebrations last weekend told a gathering of former governors and military administrators of Rivers State that he defected from the PDP to APC because the state had not benefitted from the 2.1 million votes it contributed to President Jonathan’s election in 2011.
“The reason for the disagreement between us and our former party (PDP) is that as we speak, if you go to Soku that you governed, it used to belong to Rivers State. As I am talking to you today, Soku belongs to Bayelsa State. They took the oil wells; they took everything and left the human beings for us.
“As Governor of Rivers State, I accepted the mandate. Not under my watch will I surrender what the people have given me in trust. I ask the people of Kalabari; what will I tell your unborn children that I, Amaechi ceded Soku to Bayelsa? And I said I would fight that cause to the end.
“I am not running for any other election; I am almost finishing my tenure. I will stick out my neck and fight until we recover Soku land back to Rivers State. That is one reason we are leaving PDP to APC where we think that our interests will be well protected.
“Another reason for which we are leaving PDP to APC is that the oil wells in Omuma Local Government Area have been ceded to Abia State. No letter was written to us; no boundary adjustment.
“They didn’t tell us to come and defend any boundary disagreement. We just woke up one day and they wrote us a letter that the following oil wells in Rivers State had been ceded to Abia State. No reason was given to us; we protested, yet no answer. But we are in court.
“All that is happening under the watch of our current president, who grew up in Port Harcourt. But when we protest, they get angry,” he said.
Amaechi also decried the absence of federal government projects in the state.
“I asked Mr. President: Rivers State gave you two million votes, mention the projects that you have given to Rivers State. We listened to the President’s speech, the day he came for the centenary.
“He said we are building a skills acquisition centre for N15 billion. That skills acquisition centre was between me and (the late President) Yar’Adua. He asked me what we could do to reduce the crime in Rivers State and I told him, Sir, that crime is not based on ethnicity, it is based on hunger.
“If we can train them and get them employed, it will reduce crime. I said skills acquisition will be the best and he said, fine go and build a skills acquisition centre.
“I think then, it was N5 billion and now, I hear them saying N15 billion. Rivers indigenes were awarded the contracts; the contracts were cancelled and now re-awarded to Bayelsa indigenes.
“But the president (Jonathan) said that was the project he sited in Rivers State. It was the late President Yar’Adua that initiated the project. President Jonathan only inherited it before it was abandoned. So now that the president has mentioned it, we want him to complete it,” he said.