The Federal Ministry of Agriculture and Rural Devel
opment says it has started the second phase of aerial spray to check the menace of Quilea birds in the state.
A Director in the state ministry, Alhaji Mohammed Yusuf, said the 2013 North-East Quilea Birds Control programme was to ensure food security and improve the income of the farmers.
According to him, these noble objectives cannot be achieved without effective pest control measures, especially Quilea birds with capabilities of destroying huge hectares of land.
“The Federal Government through Agricultural Transformation Agenda (ATA) is heavily intervening in the agricultural sector to boost agricultural productivity under its Growth Enhancement Support scheme (GES).

A Makurdi Upper Area Court has sentenced
one Mohammed Ali, 21, to one year imprisonment for stealing a motorcycle.
The Judge, Mrs Felicia Ikyegh, while delivering the judgement, observed that the accused had shown remorse for his actions, while also being honest in admitting guilt, but declared that he would be punished to deter other youths from such actions.
Ikyegh sentenced the convict to one year imprisonment with an option of five thousand naira fine.
“The accused shall serve one year imprisonment or pay an option of five thousand naira fine.
“In addition to his fine, he shall pay N50,000 compensation to the owner of the motorcycle,’’ she declared.

The Federal Roads Safety Corps (FRSC) in Borno said
that 39 persons died in the area in separate accidents between January and October.
Commandant of the FRSC in the state, said this in an interview with newsmen in Maiduguri.
Bazza said the victims died in 54 accidents, adding that 280 persons sustained severe injuries during the mishaps.
He attributed the spate of accidents to reckless driving on highways and disregard for traffic rules and regulations on the part of drivers.

The House of Representatives has resolved to
conduct public hearing on the alleged plan to sell the official residence of Nigeria’s permanent representative to the United Nations in New York.
The committee is to establish the veracity of the allegation and report back to the House within one Month.
It also mandated the committee to ensure that adequate resources are allocated in the 2014 budget to undertake repairs of the property so that the Permanent Representative could move into the residence.
It further directed the committee to urge the Ministry of Foreign Affairs to stop every lease or renting agreements of any apartments whatsoever, for the permanent representative at the expiration of such current leases or renting agreements.
Kano

The ECWA Eye Hospital, Kano, said it carried out free
eye operations for 300 adults at Gezawa, headquarters of the local government.
Dr Abu Sunday, Medical Director of the hospital, told newsmen in Kano that another set of 11 children were operated in the ongoing free eye camps.
“Many of such operations are done solely by the hospital or in conjunction with both local and international partners.
“Most of our free eye camps are conducted outside this facility; we go out to meet with those in need of help to save them from going blind.
Kebbi

Executive Director, National Cereals Research Institute
(NCRI), Birnin- Kebbi, Dr Mark Ukwungwu, said the institute had released 301 varieties of rice seedlings to farmers.
Ukwungwu announced this in Birnin-Kebbi during the distribution of rice seedlings to farmers as part of activities to mark the Rice Farmer’s Field Day 2013.
He said the institute had accelerated the development of 120 high yielding varieties of rice.
Ukwungwu added that 30 varieties had been screened and approved for farmers in Kebbi State.

A housewife, Ketim Isiaka, has urged an Ilorin Area Court
to dissolve her three-year-old marriage to Sule, over her husband’s alleged hot temper.
Ketim, 28, of Maraba Area, Ilorin, told the court that Sule was too harsh and easily provoked at slightest provocation.
“My husband will at times beat me unnecessarily and fail to taste the food I prepare for him,’’ she said.
She said the marriage was contracted in 2010 and had produced two children, Rashidat and Mariam.
“My Lord, I want an end to this marriage because I cannot cope with a man that cannot control his emotion,’’ she said.

The Ministry of Information said it would work towards
implementing the 22 per cent weigh-in allowance for media workers in  Niger State.
Permanent Secretary in the ministry, Alhaji Bala Moni made the promise in Minna when state executive members of Radio, Television and Theatre Arts Workers Union visited him.
He noted that the media weigh-in allowance was being enjoyed by media practitioners at the federal level and other states.
He added that the allowance would improve the services of media workers when paid.

The Ogun State Government has announced a ban on
cattle rearing along the Abeokuta -Sagamu-Siun Expressway.
The Secretary to the State Government, Mr Taiwo Adeoluwa, announced the ban in Abeokuta at a meeting with leaders of the Fulani/Hausa communities in the state.
Adeoluwa said the step was part of measures to check criminal activities in the axis.
He noted that there had been a sudden rise in criminal activities in recent times in the area, adding: “most of these unwholesome developments were linked to herdsmen operating on the highway.”
Oyo

A 56-year-old man, Adegoke Oladipupo, was arraigned
on charges of stealing and possessing a gun.
He was brought before an Ibadan Chief Magistrate Court, sitting at Iyaganku.
Oladipupo was arraigned on a four-count charge of conspiracy, stealing and possession of a single-barrel gun unlawfully.
The Prosecutor, Insp. Sunday Ogunremi, told the court that Oladipupo conspired with others now at large to commit the offence.
Ogunremi alleged that the accused stole one blue boxer Bajaj motorcycle with registration number: Lagos QS 080 FKJ, valued at N125,000, property of one Ramon Ajibade of Dalute Sanni Village, Idi-Ayunre, Ibadan.

The Plateau State Police Command says it has smashed
four armed robbery gangs and arrested 11 persons suspected to be members of the gangs “terrorising” Jos and its environs.
The Commissioner of Police in the state, Mr Chris Olakpe, disclosed this in an interview with newsmen in Jos.
“The suspects were arrested in four different operations. The squad has been working hand-in-hand with intelligence department of the command to achieve the success, “ he said.
Olakpe said that the first gang of three armed robbery suspects was arrested on Sept. 28, by operatives in Laranto Division, Jos. 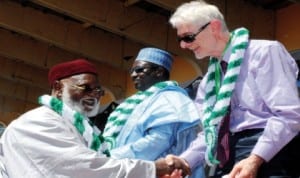 The Yobe State Government says it vaccinated more
than five million cattle in the past three years against animal diseases to prevent loss of livestock.
The state Governor, Alhaji Ibrahim Gaidam, said this in Damaturu while launching the annual livestock mass vaccination campaign.
He said that the state government embarked on the campaign to check the danger posed by diseases on livestock and livelihood of farmers.
”The vaccination is to check these diseases in order to meet international standards,” the governor said.