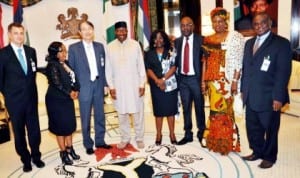 Corporal Anthony Onoja the Policeman who raped  a two- year old toddler at Kabayi area of Nasarawa State sometime in September, has been dismissed and is currently on trial, the office of the Inspector General of Police has said.
A statement issued on yesterday  by Force spokesman, Frank Mba, said Onoja was dismissed on September 13 and charged to a Nasarawa High Court on September 15.
He  said the Onoja is being charged for rape, with charge sheet No. NSD/77C/2013, and affirmed that the police authorities were not being complacent in the handling of the case.
The statement added that the suspect was dismissed after an in-house administrative disciplinary panel (Orderly Room) indicted him for the disciplinary offences of discreditable conduct and conduct unbecoming of a police officer.
According to the statement “A full scale criminal investigation of the alleged offence of rape was conducted by the Anti-Human Rights Section of the Criminal Investigation Department (CID) of the Nasarawa State Police Command. “The Case Diary was subsequently forwarded to the office of the Director of Public Prosecution (DPP), Nasarawa State Ministry of Justice, for legal advice.
“Based on the advice of the DPP, Anthony Onoja, was charged to High Court 3 in Nasarawa State. The prosecution of the ex-Police Cpl is being conducted by the Office of the DPP and is on-going. These facts can be verified by any Nigerian or group who wishes to so do, “the statement added.
The police authorities said they found it rather preposterous that some well meaning Nigerians would insinuate that they were shielding the alleged rapist from justice.
“Without fear of contradiction, the Nigeria Police Force remains one of the most self cleansing institutions in the country and has always disciplined its erring personnel without any prompting from any quarters,” statement added.
The Inspector General of Police, Mohammed Abubakar, appealed to the general public to desist from rendering blanket judgment against members of the Force for the singular misdeed of one its members.
According to him, the Police Force, like any other institution in the country, is made up of persons who individually, might not be perfect in all ramifications, just as there is no perfect institution anywhere in the world.
Meanwhile, Women activists have advocate maximum punishments for rapist. A gender activist, Dr Mairo Amshi, yesterday advocated severe penalties for rapists to serve as deterrent to others.
She said in Lagos that the Federal Government needed to implement the full weight of the existing law on rape with a view to restoring sanity in the society.
Amshi said,“We are emphasising on the government, not only enacting the law but to implement what law is due for any offender.It is a serious issue; if a daughter of mine or somebody’s daughter has had such a thing happen to her, I am sure, we will not take it lightly. Why that of the poor person or the downtrodden person?
“So, we need to find a way of ensuring that these laws are being implemented. What is  happening now is (that) we do not implement the laws even though the punishments are there.
“Of recent, the problem that happened was before the Senate, they debated it and they were all furious about the whole thing. So, if this can be forwarded, and ensuring that those people that commit such offences are really tackled, I am sure these kinds of abuses will be off our ways.” she added.
In her contribution the President, Women for Equity and Fairness Organisation of Nigeria (WEFON), Alhaji Nourat Babs-Olorunkemi expressed support for life imprisonment for any persons convicted for rape.