The strategic shutdown was implemented effectively from 09:00hours last Wednesday, by reducing gas supply to NLNG significantly from about 40 to 50 per cent of the usual total gas intake.

The Tide gathered that in line with safety precautions, SPDC shutdown gas production at its Gbaran/Ubie Gas Plant normally supplying gas to NLNG through this pipeline and reduced supply from its Soku gas plant which can only partially supply through an alternative route for a limited period before total shutdown.

According to the company, the shutdown will be in place until the source of the leak is identified and necessary remedial actions are completed to ensure safe operation.

The statement added that NLNG was working with SPDC and its other gas suppliers to seek mitigation measures.

Eresia-Eke, however, noted that NLNG had to-date delivered over 3000 LNG/NGL cargoes safely and reliably to its customers from the 22.5 million tonnes per annum capacity plant at Bonny, Rivers State . 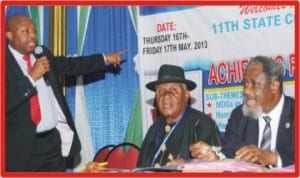 Police Withdraw Speaker’s Orderly? …48Hours After Alarm On Threat To His Life, Others