The pronouncement by the Defence Headquarters over the payment of N12bilion compensation to some communities in Obio/Akpor Local Government area of Rivers State has triggered off the clamour for autonomy by sections of the affected communities.

The Tide gathered that at a well-attended meeting at the executive chamber of Obio/Akpor local government council, in respect of the compensation, the Rumukwurukwuru section of Mgbuesilaru community had raised an objection against the  payment of the money through Eze Ejike Wali and demanded for autonomy.

The objection , The Tide learnt led to the setting up of a panel headed by the council chairman, Hon Timothy Nsirim to look into the issue.

Other members of the panel include, Hon Precious Ikezam, the council Secretary.

A copy of the judgment/settlement made available to The Tide revealed that during the process of hearing and settlement of the matter, it was discovered that  the matter bothers on lack of trust and chieftaincy dispute arising therefrom.

The judgement signed by all  members of the panel also said that acting in consultation with the people, the Obio/Akpor council decided to grant autonomous status to Rumukwurukwuru section thereby splitting Mgbuseilaru into two communities.

Meanwhile, the Eze Oha Evo of Evo Kingdom, HRM Eze (Dr) Frank Eke has described the action of the Obio/Akpor council chairman in splitting Mgbuseilaru into two communities as illegal.

Speaking during a courtesy call in his palace by the paramount ruler of  Mgbuesilaru HRM Eze Ejikeme Wali,  Eze Frank Eke who is the Eze Gbakagbaka of Ikwerreland said that the council’s action amounts to interference in traditional matters, stressing that he ought to be informed since the affected areas are part of Evo kingdom.

He, however, said that a meeting of all the parties will be convened in his palace, but added that autonomous communities are not part of the culture of Rivers State.

Also speaking with newsmen  Eze Ejikeme Wali said that the balkanization of Mgbuesilaru community is unacceptable.

Eze Wali who urged for the intervention of the state government on the matter said that the situation will lead to breakdown of peace and disaffection in the communities. 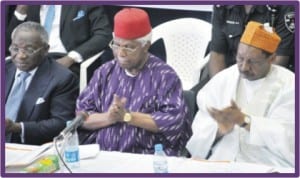