Some desperate Nigerians who applied for the Rivers State Government’s 10,000 job vacancies have fallen prey to swindlers

The Tide investigations indicate that a syndicate of fraudsters who claim to be working for some top shots in the Ministry of Education Post Primary Schools Board, and Civil Service Commission in the state are demanding N50,000 per applicant to facilitate automatic employment for them.

One of the victims who gave her name as Chidinma disclosed that the tentacles of the syndicate had spread to various parts of the country, particularly in the South-East and South-West geo-political zones of Nigeria.

Chidinma, who is an indigene of Imo State revealed that her friend who also applied for the advertised positions informed her that a member of the syndicate asked for N50,000 and assured her that if she provided the money, she would automatically get the job. According to her, they were working for one of the big men in charge of the recruitment.

Miss Chidinma explained that even though she was desperate to get the job and to also work in Rivers State, she became skeptical and refused to fall prey to the antics of the con men.

Another woman who teaches in one of the public secondary schools in Port Harcourt, equally revealed to our reporter that her son who applied for the job demanded N100,000 from her to enable him settle somebody who promised to get him automatic employment.

The teacher, who pleaded anonymity, further said her son claimed that some of his friends had also paid and had been assured of getting employment in the state.

Those falling victim, investigations show, are mainly desperate applicants from outside the state who are zealous of getting employment in Rivers State at all cost, and who fear that their paper qualification and experience might not be enough to get them the job.

The Rivers State Civil Service Commission, has explained that the competition for the advertised 10,000 job positions was open to all Nigerians irrespective of the state one comes from.

This stand of the government opened the floodgate for job hunters coming from outside Rivers State.

It would be recalled that since the creation of Bayelsa from old Rivers State decades ago, the embargo on employment has not been lifted and the swelling number of unemployed Nigerians has becomes alarming that they are desperate to secure job of opportunities from the  10,000 job placements announced by the state governor.

When The Tide sought to see the Rivers State Commissioner for Educaiton, Dr Alice Nemi, she was not in office, but a director in the ministry who pleaded that his name should not be in print said, “it is not unlikely that con men will want to take advantage of the opportunity to defraud innocent applicants”.

The director explained that no person in any of the offices concerned with the employment would want to get involved in the racket, and advised any applicant to approached to report to the ministry or the law enforcement agencies for appropriate action.

He urged applicants to believe in their personal efforts and prayers, and avoid falling prey to the wicked fraudsters.

“some of the fraudsters, I tell you, may not know where Rivers State Ministry of Education is but they will claim heaven and earth just to disposed unsuspecting and gullible applicants be remarked. 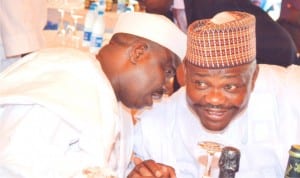 Jonathan Sacks NNPC Board …As Senate Summons Okonjo-Iweala, Others