The Pastor of Christ Chosen Church of God, Monday Uzoka, his wife and two children are among the 52 victims affected by the suicide bomb that hit the Church in Jos, yesterday.

Our  correspondent who visited Jos University Teaching Hospital (JUTH), was informed by medical personnel that Uzoka and another church elder were in “very critical situation”.

BUTH’s Director of Nursing Services, Mrs. Maria Goni,  told our correspondent that the duo had to be transferred to JUTH “because they were in a serious condition and in dire need of surgery“.

Goni expressed happiness that the Red Cross International and the Plateau Government had rendered much help in the provision of drugs and other consumables.

Our correspondent observed that among the victims were the elderly, women and children, who had suffered various degrees of injuries from the blast.

Another victim, Mrs. Mercy Francis, 45, said her six year-old daughter, Blessing, had “disappeared” during the blast and called on the authorities to help in locating her.

“That is the only daughter I have. Please tell them to help me to trace her where ever she may be, especially since I can’t get another child like her at my age now,” Francis cried out.

Meanwhile, officials say the number of casualties in the suicide bomb attack on Christ Chosen Church of God, Rukuba Road, Jos, yesterday, was yet to be known.

However, witnesses said many persons, including the suicide bomber, died.

A senior official of Red Cross Society in Plateau, Mr Manasseh Pampe told newsmen that it was difficult to ascertain the figure as yet.

Pampe said that many of the victims had been taken to various medical centres in the town.

The explosion brought down the entire church building, destroying chairs, tables and musical instruments as well as cars and motorcycles.

An eyewitness, Mr Richard Jonah, said the bomber entered through the church gate after deceiving the security personnel that he was a member coming for service.

Jonah said the suicide bomber, who drove a Volkswagen Golf saloon car, posed as a member of the church and was admitted to the premises by the security personnel.

“But immediately he entered into the premises, he drove straight into the church building and hit the structure with the bomb-laden vehicle while the second service was still going on,’’ he said.

The Police Public Relations Officer, DSP Abu Emmanuel, confirmed the incident but said that the casualty figure was still being collated.

“We are still moving from place to place. Please give us some time,’’ Emmanuel pleaded.

An official of National Emergency Management Agency official, Mr Tajudeen Olanrewaju, also declined to be specific about the casualty figure.

“As you can see, we are still evacuating those injured to hospitals. For now, we cannot give you any clear figure,’’ he said.

In another development, the police in Maiduguri have said they had made appreciable progress in the investigation into the Sunday morning attack by “four young men’’, on Ekkilizia Yanuwa A Nigeria (EYN) Church, situated on Gombe -Biu Road. The Borno Commissioner of Police, Bala Hassan, told newsmen that his command had tightened security in vulnerable areas and would continue to do its best to ensure the safety of lives and property.

“The attack on the church on Gombe-Biu Road happened around 9a.m when four young men fired at a church during which one person died and three others were injured. “The attackers fled shortly after but the police recovered a pistol, one of the weapons used during the attack ,’’ Hassan said. Biu is a two-and-a half-hour kilometre drive from Maiduguri, the Borno state capital.

Our correspondent  recalls that on Friday, a suicide bomber rammed his car into the barricaded portion of the command’s headquarters in Maiduguri during which five persons died, while 12 persons sustained injuries. The dead comprised a policeman, three civilians and the suicide bomber. 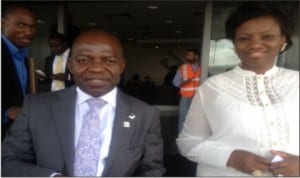 Stench Of A Gargole …That Protest By Airlines Operators