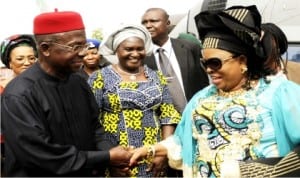 Governor Martin Elechi of Ebonyi State (left), welcoming the First Lady, Dame Patience Jonathan to Abakaliki on Wednesday. At the middle is wife of the Senate President, Mrs Helen Mark.

As the rush for employment among would-be teachers reaches feverish pitch, the Rivers State Government, says engagement of the 10,000 teachers shall be based purely on merit.

There will not be preferential treatment in favour of neither indigenes nor non indigenes in the recruitment process, says board member I, Rivers State Universal Basic Education, Hon Lucky Worlu in an exclusive interview with The Tide in Port Harcourt.

He assured that, no political consideration would influence the recruitment process as the governor had warned that merit rather than favouritism should be used as yardstick.

“This is the first time, people would see a truly free and fair employment process, and so, it is better for those who are giving their names to politicians and others to have a rethink”, he said.

He described teaching as a noble profession that has no room for quacks and ill-trained job seekers, stressing that government decided to embark on the recruitment exercise with a view to engaging competent and qualified teachers to teach in core subjects such as English, Mathematics and sciences.

According to him, in as much as government has taken over the payment of primary school teachers from the councils, there are other areas in which council chairmen can assist the government in this sector”.

He listed these areas to include provision of offices and accommodation for educational inspectors, including the educational secretaries in their respective local government areas.