After an expectedly heated debate on the report of the House of Representatives adhoc committee that investigated the fuel subsidy regime at plenary, yesterday’s  the House directed the office of Auditor-General of the Federation to, as a matter of urgency, audit the accounts of the Nigerian National Petroleum Corporation and submit its findings to the House Committee on Public Accounts within three months.

The House of Representatives who adopted  35 recommendations of the committee as contained in the committee’s report among others, unanimously agreed that the Chairman and members of the PPPRA from 2009-2011 should be prosecuted for their roles in opening the floodgate for the monumental fraud that overwhelmed the entire subsidy regime.

They also recommended to the Presidency for an immediate reorganization of the Federal Ministry of Petroleum Resources to make it more effective in carrying out the much needed reforms in the oil and gas sector just as the legislators kicked against the delay in the passage of the long-awaited Petroleum Industry Bill (PIB).

On the strength of the recommendations of the adhoc committee , the lawmakers similarly agreed on the need for review of the Petroleum Support Fund (PSF) guidelines with the view to making tax compliance a mandatory prequalification requirement for all participants under the PSF scheme.

Supported by majority of the lawmakers, the House  directed Nigerian National Petroleum Corporation (NNPC) to stop any form of deduction not captured in the Appropriation Act before remittance to the federation accounts, while the Corporation is to submit its transactions to the operational guidelines of the subsidy scheme.

Prior to the robust debate on the report, the Speaker of the House of Representatives, Aminu Tambuwal, in his opening remark had commended the Farouk Lawan-adhoc committee for their commitment to their mandate and reiterated that the House remains undeterred and would not spare anyone indicted in the bid to sanitize the polity.

His words “The probe of the oil sector has raised so much dust from certain segments of the polity such that it became clear that the intention was to frustrate it. For those who regard the oil sector as a secret society or sacred cow, I wish to state without equivocation that it is not.

“Similarly, all private sector bodies operating in the oil sector are the creation of the Corporate Affairs Commission and that  the commission is also not invested with power to incorporate secret societies.

“Let it therefore be known that in our drive to sanitise the polity, there are no sacred cows and we do not intend to discover any”

The Report of the committee led by Hon Farouk Lawan says it discovered in the course of its investigation about N1. 07 trillion fraud, while 18 oil marketing companies were indicted .

The debate which attracted a large number of youths and other Nigerians who thronged to the National Assembly but were barred by tight security at the NASS entrance gates was, however, keenly observed by representatives of various interest groups including oil companies, former members of the House of Representatives, staff of National Assembly, students, among others. The debate continues today. 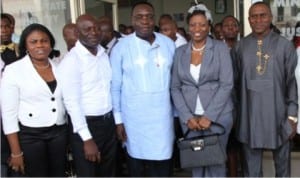 Hazards So Fatal …Thankless Path Of A Vibrant Press

Doctor In Police Net For Rape