The Ada George Road construction project embarked upon by the Rivers State Government would be ready by the end of March 2012.

Rivers State Commissioner for Works, Hon Victor Giadom who made the disclosure recently in an interview with The Tide promised citizens of the state that in two months the stress they were experincing following the construction of the road would be a thing of the past.

Hon Giadom noted that because of the importance attached to the strategic project and government’s avowed determination to fast track projects execution in the short period of the dry season, his ministry had been visiting the project site almost on daily basis to ensure that the project was completed as quickly as possible.

Our reporter who has been following the progress of work on the site reported that the contractors handling the project, Gitto Construction Generale Nigeria Limited, had taken measures to actualise the target.

According to him, work on the project had become a 24 hour business as the company source explained that “before, we work from 8am-5pm daily, but since this year, we work from 6am-6pm”.

The Tide also gathered that the company recruited more workers of late to speed up the job.

A trader who operates along the road said it had not been easy for business operators in the area because customers shun the area due to bad road which had been so for sometime now.

Another trader who gave his name as Jackson Elechi appealed to the company and the state government to do everything possible to ensure that the project was concluded before the rainy season set in.

The Works Commissioner also disclosed that the Agip flyover project would be ready in 30 days time.

“The bridge is completed. What is left is the street light and the road under the bridge. That should not pose any threat and in 30 days, it would be over”, he said.

In the same vein, the commissioner has also given contractors handling road construction projects in the Port Harcourt old township, 30 days to complete their job on the site or have their contracts terminated.

The commissioner who gave the warning at a recent meeting with the contractors in the office directed them to remove their work materials which are blocking the road so that members of the public could have easy access to their homes and offices.

According to him, the ministry would visit the area by February 15 to ascertain if they had adhered to the directive.

The companies present in the meeting were Torubem Nigerian Limited, Interlink Services and JDP. Hon Giadom used the opportunity to plead with residents for the inconveniences suffered due to the situation even when he said government had paid the contractors completely.

Responding on behalf of the companies, the Project Director of Torubeni Nigerian Limited assured of their preparedness to adhere to the commissioner’s directive on early completion.

The director explained that the slow pace was occasioned by some obstacles such as contending with volatile youths in the area, shifting of electric and communication poles and transformers, as well as the distraction by the recent  fuel subsidy strike embarked upon by labour and civil society organisations in Nigeria.

It would be recalled that road projects in the Port Harcourt old township axis were billed for completion this month. 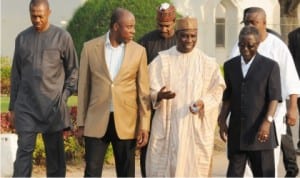 Grouse With Amaechi …‘Real Treat’ That Sparked My Angst