The Coordinating Minister for the Economy and Minister of Finance, Dr. Ngozi Okonjo-Iweala, has assured that the prices of petroleum products would drop when the four refineries are back on stream in 18-24 months.

Speaking on a programme monitored on Africa Independent Television in Lagos, the minister said the proper Turn Around Maintenance of the refineries would be carried out, to ensure lower prices for fuel.

Joined by the Governor of the Central Bank of Nigeria, Mr. Lamido Sanusi, the minister said the Federal Government was trying to make the economy production-driven instead of consumption-based.

“We will invest in refineries only in conjunction with the private sector, so we can ensure that we have working refineries. It is important that our refineries work because when they do, the price of fuel will reduce significantly.

“We are moving away from subsidising consumption to subsidising production and developmental projects like roads. We will also be investing in irrigation and hydro-power construction.

“We are using the subsidy savings for roads. When you have good roads, transporting goods will be cheaper. The savings on fuel subsidy will be used to hasten projects on ground. About 6000 of them are yet undone. Government is not eliminating subsidies,” she stated.

Also speaking, Sanusi said the government would borrow from abroad to fund its Subsidy Reinvestment and Empowerment Programme. 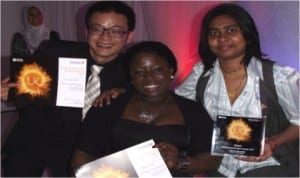 Betty Odema (middle), a beneficiary of the Overseas Scholarship programme of the Rivers State Sustainable Development Agency (RSSDA) at the Nottingham Trent University won the 2011 Shine Awards in the United Kingdom.