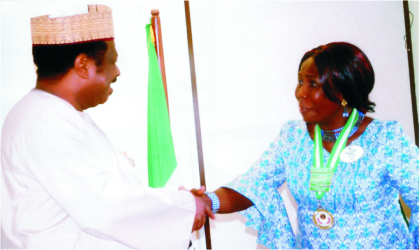 Minister of State for Health, Alhaji Suleiman Bello, in a handshake with Lion Dame Joy Warmate during a courtesy visit of the Lions Club International District 404A to the minister in Abuja, recently.

The Academic Staff Union of Universities (ASUU) has expressed fears that the National University Commission (NUC) may shut down some state-owned universities on account of poor funding.

Briefing newsmen on the situation of things in state-owned universities in the South-East and South-South zones, ASUU maintained that poor performance of secondary school students represented the cumulative effect of poor funding of education in the country.

A former chairman of ASUU, Calabar zone, Dr Emmanuel Osodeke, who spoke on behalf of the zonal chairman, Dr Charles Ononuju, said that NUC would soon embark on accreditation of universities and those that failed to satisfy the standard requirements risk losing their operational licenses.

Osodeke expressed fears that many state universities may not scale through the exercise because of poor funding.

“What the NUC has been doing is to accredit courses at various universities. But now, they will accredit the institutions themselves and many institutions may lose their licenses due to poor funding,” Osodeke said.

He argued that proper funding of the universities remain the only way to salvage education in Nigeria, stressing that poor performance of Nigerian students in the West African Examination Council and General Certificate of Education examinations was the cumulative effect of poor funding of education.

He used the opportunity to commend Abia, Imo and Ebonyi State governments for resolving the industrial disputes involving all the staff-based unions in their universities which led to the calling off of the five-month old strike action embarked upon by members of the unions.

He said the Strike Coordinating Committee of the zones were grateful to the state governments that had taken steps to end the strikes in their universities, and urged others whose university staff were still on strike to take urgent steps to end the prolonged strike.

He explained that the strike was a collective decision of ASUU to press for full implementation of the agreement the union reached with the Federal Government in 2009, adding that it was neither targeted at any person or group of individuals, neither was it politically motivated.

The union, therefore, warned state governments yet to resolve the industrial disputes in their universities to stop intimidating and threatening the lives of their members as ASUU would not succumb to such threats.

The union alleged that the Pro-Chancellor and chairman of Governing Council of Anambra State University, Prof Amucheazi, was the stumbling block to the amicable resolution of the crisis in the university and threatened to employ legitimate steps to stop him from benefitting from the proceeds of the 2009 ASUU/FGN agreement as was being implemented in Abia State University where he works.