The National Universities Commission (NUC) yesterday in Abuja formally endorsed the upgrading of the Rivers State College of Education (COE) to the University of Education (UOE) and presented letter of recognition to the state government. By this development, COE is now the 35th state-owned University in the country.

The endorsement of the Rivers State University of Education and presentation of the letter of recognition’ by the NUC was done at the NUC secretariat in Maitama District of the Federal Capital Territory (FCT) by the Executive Secretary, Prof. Julius Okojie. The impressive ceremony attended by the State Deputy Governor, Engr.  Tele Ikuru who represented Governor Rotimi Amaechi, Secretary to the State Government Mr. Magnus  Abe and Commissioner for Information and Communications, Mrs. Ibim Semenitari as well as the Acting Vice Chancellor of the new University, Prof. Rosemond Green-Osahogulu.

Speaking at the presentation, Prof. okojie commended the Rivers State government for the giant strides it has recorded in the education sector and assured that the NUC was standing by its quest to take education to the next level in the state.

“I must commend your government for what you are doing in education. I appreciate what you are doing. I wish you well. At the appropriate time, you’ll know that we (NUC) are really here for you”, he said, adding that the commission would soon embark on an inspection of the facilities at the new university that has three campuses, after which candidates seeking admission  into the university will be doing so through the Joint Matriculation Examination (JME) organised by the Joint Admission and Matriculation Board (JAMB).

“Upon verification, JAMB would commence admission formalities”, he said. In the spirit of giving the state government necessary support for the attainment of its lofty dreams in education, Prof. Okojie pledged  that the commission would wade into the strike embarked upon by the Academic Staff Union of Universities (ASUU).

Governor Amaechi speaking through his Deputy, Engr. Tele Ikuru thanked Okojie immensely for all the effort  made to ensure recognition for University of Education”.

“We are moving the current university of Science and Techonolgy to 2,000 hectares of land. We’ll move the present University of Education to that campus too”, he assured.

Amaechi said, the problem they had was that of poverty among Rivers people, and to deal with it, “we resolved to put education in the right perspective and take the people out of poverty.

The ceremony featured  presentation of NUC newsletter to the state government. 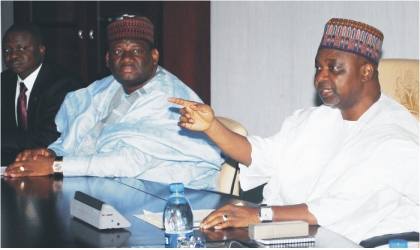 From right: Vice President, Namadi Sambo, Minister of Transport, Alhaji Yusuf Suleiman and Special Assistant to the President on the Niger Delta, Mr Timi Alaibe, at a meeting on the review of amnesty programme in Abuja, on Monday

In Defence Of Odili …A Prophetic View Beyond 2015