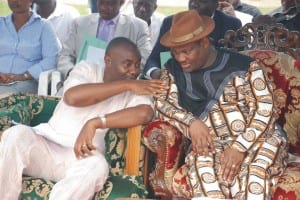 Twenty-eight National Youth Service Corps (NYSC) members who served in Rivers State will repeat their service year, while 18 will have their service extended from two to five months without pay.

This declaration was made, yesterday, by the Secretary to the State Government and Chairman of the state NYSC Governing Board, Hon Magnus Abe, during the passing out ceremony of Batch “A”, 2009 Corps members in Port Harcourt.

Abe, however, noted that the corps members had positively impacted on the lives of the rural communities where they served.

The punishment meted out to the 46 corpers is believed to be connected to their failure to abide by the rules and regulations governing the NYSC.

Earlier, the Acting President, Dr Goodluck Jonathan had ordered  the re-admission of graduates of monotechnics and other specialised institutions into the NYSC scheme.

Jonathan, represented at the ceremony by the State Governor, Rt Hon Chibuike Rotimi Amaechi, who was represented by his Deputy, Engr Tele Ikuru, noted that the scheme’s contributions to educational and health sectors are testimonies to its continued existence.

He observed that the ongoing restructuring of the scheme is aimed at making it more relevant to the Federal Government’s transformation efforts and assured the corps members of adequate security in their places of primary assignment.

The Acting President commended the corps members for successfully completing their service in the State,  and urged them to apply the skills acquired during the service year to enhance their future endeavours.

He advised them not to be ashamed of taking up any job or service that could empower them financially, pointing out that such could be preparatory steps to greater opportunities and expressed appreciation for “teaching Rivers children in the schools”.

Earlier, the State Coordinator of the scheme, Mrs. Esther Wogbo, expressed delight that the corps members took advantage of the “window of opportunities” provided by the service year to contribute to national development.