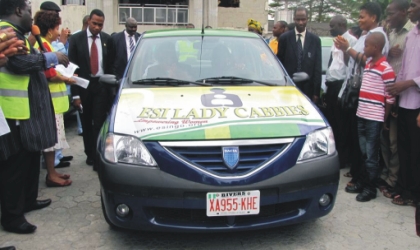 One of the sixty vehicles donated by the Empowerment Support Initiative (ESI) for female commercial drivers in Rivers State.

Students of the Rivers State University of Science and Technology (RSUST) Nkpolu have picked holes with the school fees regime , saying that it is intended to make education a preserve of the rich.

The students who barred their minds, Thursday, at the Port Harcourt High Court Premises where they had gone to sign their student’s discipline form”, an agreement compelling them to abide by the institution’s  decision, condemned a situation where they must pay an extra sum of N5,000 for late payment of fees after January 29, 2010

‘The implication is that as the money increases, anybody who is unable to pay will dropout of school, the student continued.

The students also faulted the schools decision to compel all students to come from their home every day, saying that it could be impossible for some, given the  transport situation in the state and the amount of money and inconveniences involved in coming from home every day.

Some also stated that their families are not based in Port Harcourt, hence they feel more secure on campus.

The students also complained about the school authority compelling them to pay N6,000 for information and communication technology (ICT) training while some  already have the requisite ICT knowledge and so do not need to undergo any training which even those studying computer science and related courses are being compelled to undergo.

‘Moreso, ‘ they said the compulsion for students to undergo the training in RSUST smirks an intent to not only extort money but to do so at the detriment of the future of bonafide indigenes in the state, one of the students said.

One of the students specifically, stated that the worst is that students are not even considered when decisions are taken by the school authority.