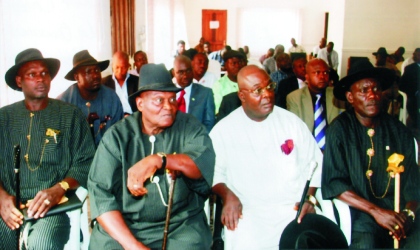 HRH, King Kroma Amabibi Eleki Sara XIV, Amanyanabo of Kula (2nd left), other chiefs and elders of Kula at a community meeting with State Security Service and representatives of Rivers State Government at the SSS office in Port Harcourt, recently.

The 27th African Cup of Nations got under way in Angola last night with an impressive opening ceremony that most highlighted their traditional and cultural heritage.

But it was the dramatic opening match between the hosts and Mali that probably held the neutral watchers spellbound and the home fans at the November 11 Stadium, Luanda stunned.

The Palencas Negras, as the Angolan National team is fondly called threw away a hefty 4-0 lead and allows the Eagles of Mali to record a historic comeback form the dead.

While the star studded Mali side led by Frederic Kanoute of Sevilla FC and Mahamodou Diarra of Real Madrid, both of the Spanish La Liga, struggled to string parses together, Angola’s attack led by Flavio and Manucho forced Mali’s defence to make mistakes.

As the first half wore on, the hosts, apparently buoyed by the electric atmosphere and home support began to impose themselves on the game.

Two headed goals in a space of five minutes by Flavio ensure that Angola ended the first half in a very strong position for a dream start to the Nations Cup.

In the second half, Mali showed early sign of comeback when they created their first real scoring chance, which was fluffed by Skipper Mahamadou Diarra inside the six yard box.

But it was the Angolans, aided by woeful defending and poor overall play Mali, that grabbed two more goals from the penalty spot.

The first was a gift when Bagayoko tripped impressive wingback, Gilberto inside the box and defender picked himself up to score.

The second was a soft penalty after Gilberto easily went to the ground from the slightest of touches by Seydou Keita.

Mnucho converted the opportunity to give the hosts a seemingly insurmountable 4-0 lead in the 74th minute.

But five minutes later, the Mali revived and came back again.

Angola’s late substitution of two goals scorer, Flavio proved to be a premature celebration as the side lost steam and Keita motivated Mali to a later Surge. An exquisite head by Kanoute in the 88th minute reduced the tally to 4-2.

The Malians were afforded a further five minutes of added time and they made every second count.

Keita latched onto a cross to slam home his second and Mali’s third goal, while Yattabore stunned the hosts with the equalizer at the death of record, probably the Nations Cup’s biggest comeback in history.

Meanwhile, Togo has finally withdrawn from the continentwide soccer tournament and its players reluctantly left Angola yesterday, two days after a deadly ambush on the team bus killed three and injured eight. A separatist leader warned, however, that violence would not likely end.

It took a call from Togo’s president to persuade the players to leave the African Cup of Nations; they said they wanted to stay and compete in honour of the assistant coach, team spokesman and Angolan bus driver who died in Friday’s attack.

The government dispatched the presidential plane, while Togo’s Prime Minister Gilbert Houngbo said Angola had not done enough to protect the team after the attack in Cabinda-the oil-rich region in northern Angola which has seen occasional separatist violence.

“We fully understand our government’s decision to leave because they didn’t receive enough guarantees for our security,” forward Thomas Dossevi told The Associated Press. “We as players, we wanted to stay to honor the memory of our dead people, but both positions are understandable.”

Togo team captain Emmanuel Adebayor, speaking in an interview with France’s RMC radio Sunday, said the team had decided finally to “pack our bags and go home” after the Manchester City striker got a call from Togo President Faure Gnassingbe himself urging them to return.

“That’s what made the difference,” Adebayor was quoted as saying in a transcript of his interview on RMC’s Web site.

Boarding the plane, Adebayor told journalists: “We have to mourn our dead. We go back home to do this.”

Togo Sports Minister Christophe Padumhokou Tchao, who was accompanying the team home, told the AP three days of mourning had been declared in his homeland.

“We can’t be in a period of mourning and at the same time be in the festival” of sport, he said. He added Togo had asked organizers to postpone the tournament.

The airport scene was chaotic, with dozens of police struggling against a crowd of Journalists. Two planes carrying the players and officials then sat on the tarmac for several hours before taking off.

The tournament began earlier Sunday with an opening ceremony in a Chinese-built stadium in the capital, Luanda, livened by fireworks as well as both traditional and contemporary performers. Several African heads of state attended, including President Rupiah Banda of Zambia and South Africa’s Jacob Zuma, whose country will host the World Cup later this year.

“Despite the terrorist attack, Cabinda will remain a hosting city,” Angolan President Jose Eduardo dos Santos said in an opening speech. “There is no need to be afraid.”

Most top officials of the African Football Confederation, known by its French initials CAF, went Saturday to Cabinda, where some of the injured were still recovering, and implored Togo to stay.

CAF president Issa Hayatou said he’d received a guarantee from Angola Prime Minister Antonio Paulo Kassoma that security would be beefed up for all teams and at all venues.